March 2016 – You want to know what neighbors in the Philippines talk about when they go solar? And why they rather invest their money in solar technology and not the bank?

Here is a true story about how the word of investing smart in solar technology spreads in an urbanisation in Pampanga: Door-to-door talk about what the power of the sun can do for you.

Meet Carlos and Richard! Yes, we changed the names, but they both exist and are now sitting happily under a roof of photovoltaic panels, saving money each time they turn on the AirCon or push the light button.

Carlos is one of the first movers in the new neighborhood when it comes to solar power for private usage. In his recent house he had to cope with a substantial monthly bill of around 12 000 Pesos per month.

But his new house in a beautiful new urbanization in Pampanga will top that easily. The house will have around 200 square meters for his wife and two kids, a grandmother and a housekeeper. Add an office, a pool and an impressive outdoor lighting system and you end with a an electricity bill that can make you cry.

How does this calculation go, why did Carlos decide on solar energy in order to save money? 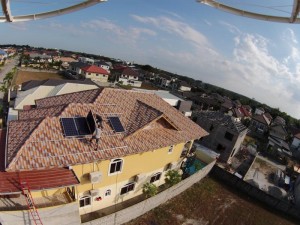 Well, that is what Richard wanted to know when he saw the team of Meister Solar mounting the solar panels on his neighbors roof top. Right over the fence he asked: Carlos, why you go solar?

This is what Carlos told him:
“I pay 687 000 Pesos to have my own 7.14 kilowatt solar power plant. This solar power system will produce around 10 000 kilowatt per year. At today’s cost for electricity at 10 pesos per kilowatt this will save me 100 000 Pesos every year.”

“So you do the math: My solar power system is fully paid after less then seven years! And if you look at inflation and rising costs for electricity it might start producing free energy even sooner!”

At that point the eyes of Jimmy got pretty big. He thought, this solar thing is just a show of for people who want to go green and save the environment.

Sure, solar power is clean and sustainable energy and every new solar power system helps to save the planet. But the owners of this solar power units are calculating sharp and invest smart. Every Peso invested in solar power actually is a better investment then giving it to the bank and getting almost nothing in return.

Carlos and Richard started doing the math together and quickly found out why solar is the one of the best investments out there!

Photovoltaic cells on your roof beat any bank!

So Richard and Carlos pulled out the calculator and crunched the numbers.
If they take 500 000 Pesos to the bank they get some amazing 0.3 percent per year. Something you have to laugh about if the joke wouldn’t be so bad.

And that was the main reason why Carlos invested in solar energy: The return on his investment.
His iphone calculator had to work overtime again:

678 000 Pesos he invested in his new private solar power system.
Every month he is saving 8300 pesos on his electricity bill. For the whole year he saves an amazing 100 000 Pesos.
So he is making 15 percent on his solar investment. The photovoltaic cells on the roof are real money maker!
Ok, Richard got that one for sure. He already could imagine getting his own solar system to not only save, but make money.

But he wasn’t finished investigating why his neighbor went solar. 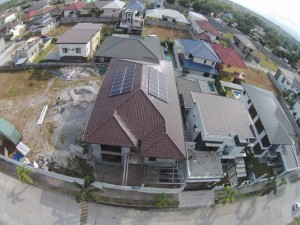 “Fine, but what about reliability and sustainability? Who long do these systems last in our environment with heat and rain and even salt water near the cost?”

He was used to Carlos answering his good question with a big and happy smile, but this time it almost got out of hand:

“Bro, Meister Solar is only installing systems with high quality solar products made in Germany. They give me 10 years warranty on my solar system. They have been working with their supplier mptec from Germany for almost 20 years.

They have a track record and are in for the long run. I prefer that over blabla talkers who want to sell quick and are gone the next day. Meister Solar stands for sustainability and reliability. I trust them.”

Richard was sold. Made in Germany means quality without compromise, everybody knows that. He wanted his own solar system, right there, right now.

But then he pulled his final joker and thought he could somehow still catch Carlos on the wrong foot: “But what if you move and all your money is tied up there on the roof?”

Carlos did not hesitate: “The photovoltaic panels are mounted on the roof with an easy click system. With in no time Meister Solar can dismantle them and move them to a new location, also the inverter and the rest of the system. The complete system is flexible, mobile and easy to move. The installation costs are very low!”

Would it surprise you, that Richard ordered his own Solar System that very same day?

When do you go solar? If you have more question and want to know what we can do for you: Talk to us!